About a year ago I reviewed the first six episodes of this daily drama from Japan. I can’t say I was impressed. It was about what I have come to expect from the typical TV show over here. Hackneyed plots, sub-par acting, bad music. Despite all that it is also one of the few shows over here in Japan that might touch on anything approaching the racial issues here in Japan, so I’ve slowly continued the show. Did it get any better? Read on. 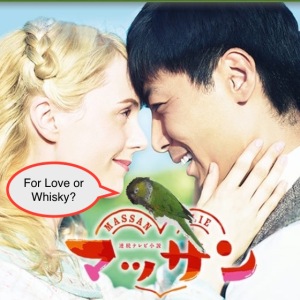 Quick Review: Pretty much everything I said in the earlier review still holds true. The acting is still lacking, music cues still clumsy and overused, plots are eye-rollingly basic. It really only serves as new language to listen to. Everyone and then it gives a glimmer of hope of offering some social criticism. But then it either backs down from the premises it offers or perhaps has no clue that it was treading into such waters.

Analysis: The show basically offers two storylines. Massan trying to make his whisky and Ellie coping with life as an immigrant in Japan. It seems that Massan receives the bulk of the plots although it invariably ends up with him shouting about how he wants to make the first whisky about Japan, others saying that is crazy, he yells some more or perhaps cries, the other party is swayed and a small step is taken forward. Cue more yelling, another obstacle, or perhaps the same one recycled, more yelling, slight progress. Usually the solutions involve the recitations of phrases that bring a nationalistic tear to the eyes of all. Perhaps this would be more bearable if the Ellie plots weren’t coupled with it.

Ellie, the Scottish wife, is still generally shown as good hearted and doing her best to fit in. In the process she is shown as basically being a doormat for those around her. She can smile and give encouraging speeches as long as she doesn’t actually attempt to make any changes to those around her. They are left to consider her good features, which tend to be those that increase her “Japanese-ness” and she tends to discard any of her Scottish features that extend deeper than surface flavoring.

Maybe I’m adding a little much of my own feelings into the show, but after a series of episodes where she is shown to be treated as an incompetent, as only being good for manual labor, as struggling to achieve any proficiency in tasks that are easy for “Good Japanese”and then give a whole speech about how much she loves her life in Japan especially after the racist expectations her parents had over the country, maybe the show bears its own share of the blame as well.

Basically, the show rewards characters for treating Ellie poorly and she is rewarded for dealing with it with a smile. No lessons are learned other than the reinforced lessons of in Japan you must do things the Japanese way or be punished. I’m really nor sure if the show is ever aware that it serves as a commentary of modern Japan or that the message it delvers is practically one of intolerance not only for foreigners, but for women in general.

So, if this show is offering no new surprises then why am I bringing it up? Because it introduced a child which brings back the mother-in-law. This now grandmother has been a large source of direct intolerance for Ellie. And she has never been called to task. Massan has always been more interested in making whisky than caring about Ellie’s obstacles. The show continues this even the criticism expands into bringing up children.

And then there is the harshness to my ears whenever the show wants a character to speak English. Awful, just awful. I teach in an elementary school and have several students with more mastery of the language than supposedly fluent characters. I know this is a show, and not something unique to Japanese TV, but having characters speak such crappy English when this is arguably a fairly important element of the show, just hurts. There seems to be no attempt at even sounding passingly capable in the language for even the most basic phrases. I refuse to believe that “Sankyu ehberii wan” is the result of any training whatsoever.

Wrap Up: It is like a traffic accident. It is pretty awful, but I just keep watching.