Other than very pretty art, I didn’t think much of the first issue. That said, it did its job of making me pick up issue two. Or was it the desire to want to like the book what made me pick it up? Either way, I don’t think my opinion on the quality of the book has changed. 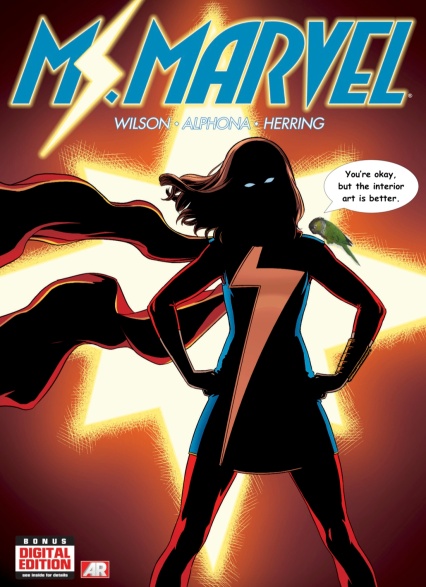 This issue is gorgeous. I love the sense of fun and quirkiness that Alphona inject into pretty much every image. It really is great. The colors are also fabulous. Ian Herring is adding a lot to this book. I can’t imaging what Alphona’s work would look like without it. I don’t know who came up with the yellow figure outline around Kamala when she uses her power, but it adds a nice touch (even if it is missing in the final panel. The art alone is almost enough of a reason to pick up the book.

Which is good, because I’m less of a fan of what Wilson is doing here than I was in issue one. Pretty much every word feels trite and cliched. Joke about superhero costumes? Check. Girls scared of bugs? Check. Unlikable characters continuing to be one dimensional and unlikeable? Check. She had to save them? Check. I want to dwell on that scene because it just doesn’t work and feels incredibly shoehorned in. Our two one-note Jerks, Josh and Zoe are near the river. Josh is drunk. Zoe is not. Josh causes Zoe to fall in the water. Hero has to go in and save her. What?  Sure, it is surprising to suddenly find yourself falling in water and I’m sure there have been accidents, but it feels like a rather pale threat. Plus there are a number of tweaks that would have made this scene work. 1) Have drunk Josh fall in. 2) Zoe is drunk too. 3) Zoe hits her head as she falls. 4) On the dock Zoe mentions she can’t swim or is scared of water. Those are just off the top of my head. Or how about a scene that involves actual super heroics? It takes her half a page of contemplation before she gets involved in a situation that poses no threat to her whatsoever. To wait that long, and the top wide panel and two stationary face panels does make it feel like time passes, I have to wonder was if it just panic or was Kamala actually considering not getting involved? While I did like how the Quran was used as positive motivation for saving others, the framing of the scene takes away the immediate human desire to save another as a motivating factor. Even just moving around panel locations would have made this scene much better. After all that whining I should mention that I did like the five pages with her family. Her dad almost came off as a multi-layered character, but some (a lot) of credit goes to Alpona’s skill at having the characters act.

I don’t feel we learned much of anything this issues, just that she has shape changing powers. Now, about those powers… First, never been a big fan of generic shape change as an ability. It tends to get abused way too much. Mr. Fantastic is limited by stretchiness. I think at one point mystique had limits, but those seem to have been melted away. Plastic Man… is in DC so I’ll leave him out of the discussion. Kamala, I guess will be the offspring Mystique and Mr. Fantastic would have created. Sure. Not a fan of the power set. But Wilson compounds the issue by repeatedly brining up clothes. Every time clothes are mentioned I wonder what her powers do to her clothes. It is a geeky, nitpicky question, but Wilson keeps raising the issue.

Also, the issue brought up two issues that weren’t answered. 1) Page three. Gorgeous full page of Kamala at the top of the stairs leading down to the river. Helicopters fly over shining lights into the fog. Why? Who are they? The helicopters are black. Are they government? What’s the deal with the helicopters? Never answered. I am much more interested in those helicopters than I ever was with Josh and Zoe.

2) Page one. First caption. “Jersey City. 12 hours after the Terrigen bomb.” As I reader of comics news I am aware of the Terrigen bomb. Nothing else in this issue, or the issue before had any mention of the Terrigen Bomb. Why include it? The reason I bring this up is that I have a suspicion that the reason for her powers will not be cleared up. I doubt we will be given an explanation for the vision she had in issue one. Or, if it is explained, it will be as lip service pointing to the larger Marvel event. Something along the lines of “Aliens unleashed a bomb that gave some powers. Hallucinations are a side effect.” That would not a satisfying explanation make.