During my morning commute yesterday in addition to writing a post about the slow monotony of traveling to and from work, I also read the news about how new character, Riri Williams, will soon be taking over as the new Iron Man. 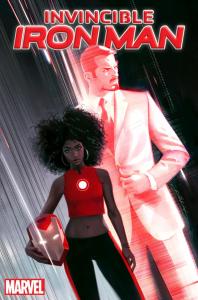 Understandably there are a fair amount of people who are excited about this news. Iron Man is now considered to be an A-list character and having a fifteen year old black girl take up that mantle can be a powerful gesture. Of course how she becomes Iron Man has not yet been told, but given her few appearances it is no stretch to speculate that her intelligence will play a role. Certainly a positive portrayal of an underrepresented group is something to celebrate.

And yet despite that when I read the news I found myself rolling my eyes and thinking “Not again.” Now I am a 35 year-old white guy and I like comics. That alone is probably enough to make many readers suspicious that my lack of excitement is due to a dose of fear-of-change topped with a dollop of racism.

And that would make it easy to dismiss any reasons I might have. I’ve certainly seen that argument, or claims of sexism, used against those who haven’t embraced changes. Of course, on the flip side, I’ve also read opinions of those against change that are drowning in hate. All I can ask is that you bear with me and read along before you jump to any conclusions.

To get it out of the way, there probably is a bit of fear-of-change sprinkled in to my reasoning. I like Tony Stark. I want to keep reading about him and his adventures. With Marvel Unlimited I’ve read all the comics bearing his name from his first appearance up until 1988 (yes, many of those early adventures don’t bear his name on the title, but bear with me) and for more modern Tony I’ve been reading almost everything since Warren Ellis took over.

That is a lot of comics and arguably a lot has changed during those runs, but there can also be said there has been an essential sameness to the character. Even during the run where James Rhodes donned the old shell head, which is an awesome group of comics, reverted back to the old status quo. And during that storyline Tony, and his failings, loomed large. And even with the big news that Riri Williams will be Iron Man, does anyone think Tony Stark will be forever removed from the story or even the suit? Comics is the appearance of change, seldom change itself. So, I guess my lack of interest stems less from fear-of-change, but not wanting to go on that journey.

But why don’t I want to go on that journey of a story and does it have anything to do with Tony’s replacement being a young black girl? Honestly: Kinda, yeah. But not in the way you might think. And, really her race has less to with it than her newness. James Rhodes’ stint as Iron Man was long enough ago where I have no idea if his race played into the stories reception. It wouldn’t surprise me. But he was also an established character and his transition into the role felt like the natural product of the story being told.

More recently Pepper Potts was the more active armored super hero, and while she went under the name Rescue she was the fill in Iron Man. Again, I don’t recall any big reactions. Maybe there were, but I don’t remember any dismay. And Potts’ actions felt like something that fit the story and where the story was going. It was a natural element.

Both of these were the culminations of long form story telling using well developed existing characters. By comparison, Williams’ being tapped as Iron Man, will still being unrevealed in universe, has the aroma of being a gimmick. Her race and gender, at least to me, won’t effect the quality of the storytelling. However, I think it is fair to say that having the new Iron Man be a young black woman will certainly increase the coverage and boost the signal.

And as business venture it is probably a smart move. (Enter pure speculation.) What is the risk/reward for making this change? Will there be those rage quitting the comic? Maybe. But, will there be more customers interested to pick up a comic that reflects a more diverse world? I’d love to this so. And, yeah, that will probably be even greater of a number on a household name like Iron Man than if she were to just be Steel Woman. So, I’m willing to grant that it is good business sense. And maybe that is enough to say this is god move by Marvel. But I am loathe to say the bottom line is a refection of creative quality.

Or of effectively increasing diversity. If you read my post before the change to (Lady) Thor happened, this might sound familiar. (Goodness, was that two years ago?!) Replacing an established character often sets the new character up as an opposition character. There was certainly some grief surrounding New Thor. These flames were fanned with Marvel and Jason Aaron not so subtlety saying something like ‘If you want Odinson back or aren’t enjoying these Thor stories you are a sexist jerk.’ (not a quote.)

I can’t help but wonder if we are going to see the same here. Fans wanting Tony back and others painting those fans in less than favorable terms. (Sadly some outspoken fans are already acting in ways that earns those terms.) I just don’t see how reducing comics fans into camps of us and them is a good thing.

Also, what happens to Riri Williams when Tony Stark comes back? Does she go the way of Battlestar? Photon? The several temporary Buckys? If we want more diversity in comics, and I do, why are we wasting new characters on replacement characters? Aren’t there better ways to introduce a new character? Think about Kamala Khan. Sure, she uses the name Ms. Marvel, but she never came off as a fill in. Now, I’m not a fan of Wilson’s writing, so I haven’t been a fan of her comics, but no one can deny that this new character has tapped into something fans wanted. And she was able to do so without us and them camps and without using a fill in name.

I guess I’m saying if Marvel wanted this to feel more like diversity instead of like a gimmick they would be handling it differently. If all these press releases were about a new armored hero called Nomad with the creator and pilot being a 15 year old black girl I would be excited. Instead I just role my eyes and ask how long is this gimmick going to take.

But maybe I shouldn’t be listened to. I’m still waiting for Thor to come back. Partly because I like the original recipe and partly because I really wanted Lady Thor to be Mary Jane Watson.