This is the third episode I’ve watched today. I’m trying to binge these shows before I go to camp (which is where I am when this is published.) Don’t know if this will make the shows better or worse, but it does make the more disappointing elements feel more potent. Whatever that means. 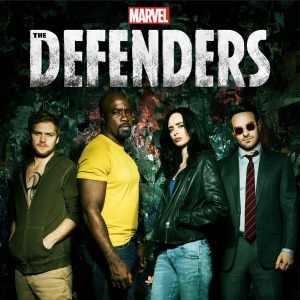 Hmm. Kind of an odd situation here. The truth is I spent much of this episode rolling my eyes and wishing it were better. Then the last 15 minutes happened and I was back in. Maybe this means all the show needs is a super hero brawl to win me over. Kind of a shame the rest of the show just doesn’t work for me.

So, yeah, superhero brawl. Fun stuff. So much fun I’m willing to ignore that the entire boardroom staff were carrying collapsable batons. Also wondering if this is somehow in response to the complaints that Iron Fist was chock full of boring boardroom scenes. But it was nice to see. This might be the best Iron Fist fight yet. I’ll admit I sighed a little when everyone ran away from Elektra. Okay, I didn’t so much sigh as think “C’mon, she’s not Magneto.” But it still finished on a high note.

But the things that bugged me were pretty fierce. The whole “privilege” argument just felt poorly done. It never felt real. It was an engineered argument to show them starting off bad so (possibly) than can be besties by the end. Also, possible a way for the creators to show they heard complaints about Iron Fist by repeatedly smacking him down. That could be a worthy discussion, if it were later between friends.

But what really got to me was the how the hand is a weird pan-Asian thing. Headed by the immortal Weaver. And it is still a magic ninja cult. Now, this could have something to do with my having lived in Japan for a while now, but I can’t help but think if the Hand actually had something to do with Japan, it would be much better. It would feel rooted and authentic. instead of feeling slapdash and offensively its-all-kind-of-Oriental-right.

And while I will by pantsuit Weaver as “The Money,” I’m having a hard time believing her as the threat. Which is strange, because I have no problems believing Scott Glenn as a threat. Maybe that is sexist of me. Or maybe that is because I’m am being asked to believe Glenn is a threat in a grizzled, old and wily way. Which he totally is. Or maybe it is because I love him in Silverado and he gets so little love.

After wading through 2 and a half episodes it was nice to be rewarded with some fun. I almost don’t want to continue binging because the show currently feels pleasant. Don’t want to end on a stinky episode before going out of town for a few days. But I might want to get one more review in the pipeline.