NHK World, one of the off shoot channels of Japan’s publicly funded NHK, has put out a new bilingual drama entitled Home Sweet Tokyo. NHK World is sort of meant to be the international version, or perhaps it is better to call it the foreign language version. It is a little hard to tell if this presentation is more meant for international folk wanting to get a little tidbit of Japanese knowledge, or if it is for the Japanese market to hear a little bit of English. Either way, I decided to give it a look to see how a show led by a foreigner would look. 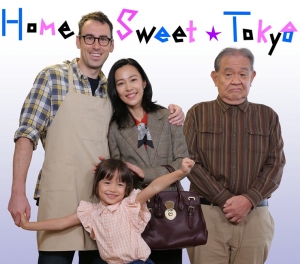 A show that styles itself as a situation comedy managed its way through its 17minute run time without earning a single laugh and instead earning more than its share of groans and eye-rolls. Which shouldn’t be a surprise since it seemed that most of the shows energy went to making sure it delivered the message that “Tokyo (and all of Japan) is safe!” rather than trying to develop an actual storyline or work on characters. Well, that isn’t entirely true. We do know the main character, the Londoner husband now living in Japan, is a buffoon with absolutely no Japanese language skills.

Right there at the top of the problems list is that this show is more of a PR plug for Japan than anything else. It wants you to know that Japan is safe. Safe. Did I mention how safe Japan is? That this show has the bad timing of coming out only a few weeks after a man was arrested for killing at least nine people and keeping their heads here in Tokyo is perhaps unfair, but it certainly shot around my mind overtime that note was plucked. And since the safety issue also centered around kids commenting to school, I also couldn’t help but recall articles about the extremely high amount of sexual assault to commuting women (starting from their time of elementary school) and how little action the police give such issues. But, hey, safe.

Still, I feel a little bad attacking the safety stance of the show, even though that was where most of its time was spent, when there are so many other questions to ask. First off, in a first episode you might think that there would be some time spent of telling the audience how this family of London man, Japanese woman, their daughter and the Japanese grandfather came to be living where they, especially since, as mentioned, the husband has no language skills. Well, don’t worry. The show has absolutely no interest in giving you those frivolous details.

Just as they have no interest in showing any affection or even warmth between the spouses. I can’t recall a single interaction in the show where the wife wasn’t shown scolding, chiding, or otherwise dismissing her husband. Now, its true that bickering spouses are a staple of for too many tv shows, but most of those will include of scene of warmth between the two so that we know that despite it all these two are in fact deeply in love. None of that here. Just spouses who live together and bicker. And when the husband thinks about his wife’s response to a problem she is as an evil phantom who can only yell and threaten.

But maybe that is to be understood, because the husband is a bit of a buffoon. He understands little. And that isn’t just in terms of language. Most of the show is about him not understanding anything about what is going on around him. And he loses his wallet. But don’t worry, it was turned in. Because, you see Timmy, Japan is safe. But perhaps I shouldn’t be overly hard here either, because the bumbling spouse is another one of those tropes that does like to appear in Japanese entertainment. It was certainly common in the other drama headlined by a foreigner, Massan.

Sadly, the other common feature of Japanese entertainment, incredibly wooden acting, is also on full display. All of the performances are staged and feel inauthentic. Nothing feels real. In a world of video capable smart phones and folks you-tubing their lives, we have the husband breaking the fourth wall to directly speak to the audience, yet again reminding us that this show is fake. It isn’t another world to immerse yourself in. It is a piece of scripted PR that fails to truly inform or entertain.

I’ll be honest that I had low hopes for this one. But even I was surprised by the overall weakness of this show. It’s hard to think of a redeeming factor. Still, I will admit to being curious if the quality can improve. Also, I’d be curious if they even make an attempt at showing that not all foreigners are this clueless. Or that not all foreigners in Japan are white. (Even if that is exactly what I am.) I can’t say I recommend this show but it can be streamed from the NHK world site.