I want to celebrate all that is good in comic books and comic book related media. I grew up during the 1980s when we weren’t as blessed with the abundance of TV shows and media as we are now. Superheroes have been modern day myths and a stage for a variety of narratives to play out. I really like the idea of superheroes and want to champion them. Keep that in mind. I want to like this show. 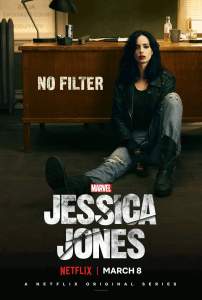 My most common thought during this episode was “why are they showing this to me?” It wasn’t bad. It just wasn’t that interesting. It is the start of a mystery, that I don’t really feel invested in, where we are being given various false leads and red herrings and dead ends. And I just couldn’t figure out why I was supposed to care. Really, that is my problem with this episode. The events being shown are not that compelling at face value. It relies on a desire to follow these characters no matter what. But I still need to be wooed, and the show isn’t trying to win me over. As I result, for a vast majority of this episode, I was simply bored.

All I really plan on doing with this section is giving some specific examples of what I wrote above. Let’s start with Jeri Hogarth. I remember she is a lawyer and kind of a grey character, neither really a hero nor villain. And I’m pretty sure last episode gave her a sickness. This episode shows the fallout. She is hanging out with hookers and using drugs. The problem is what does this advance? Is anything moving forward with this information? Sure, the story of Jeri Hogarth, but I have to ask why do I care? What reason do I really have that this supporting character is having issues? I have more feelings for her as Trinity, from the one good Matrix movie, than I do from the past 15 episodes of Jessica Jones. So, again, what does her sickness have to do with the story being told?

To a lesser degree, I have similar feelings about Trish’s radio show. The success or failure of that show is not something I am invested in. And, in these shows, I feel that we are being told it is important rather than being shown we are important. I don’t care if the show goes away because I do’t feel connected to it and that seems just as interesting a place for the character of Trish to be as having a show. So, drawing out the ratings dispute just feels like filler.

Just like all the story elements surrounding Dr. Kozloff and Will Simpson just felt like filler. Both of them basically existed to be investigated, fill time so we could then learn that “oh-my-goodness! There is someone even worse behind them!” But seeing as how they were both just plopped down in front of me, having them both scooped out of the way in the same heavy-handed fashion just feels like my time has been wasted.

It almost seems like there was feedback about season one saying the the Purple Man (yes, still kind of annoyed that he wasn’t purple to be honest) was a great villain but having only that one story element stretched over 13 episodes was unsatisfying. So, as a a result, they are adding in twists in turns, but they are adding it before we even care about what is going on.

And, lastly, because I’m not caught up in the story I am very aware of the music trying to do its job and enhance the scene. But because I am so aware of the attempted musical manipulation, it is having the opposite effect and causing me to roll my eyes at how on the nose it all is.

I want to like this, but it just feels so clumsy and pointless at this stage. This is a talented cast, but the production just isn’t doing them any favors.