Kimura blinked twice hoping that wind clear the snow from his eyes.  The wind was cold and bitter.  The dryness of it made his eyes water.  He vision blurred.  He squeezed his eyes shut a third time knowing it to be dangerous, but he needed to see clearly.

The old man in front of him hadn’t move.  His loose grey hair blew freely in the wind.  He was bundled up for the cold.  The jinbei he wore was brown and tied across his ample belly.  Underneath the its thick but short sleeves was another shirt whose rough fabric extended down to his wrists.  The old man’s callused hands were hanging at his sides, palms facing forward.  Rough fabric pants extended down to feet which were covered in thick socks.  The wooden sandals he wore must has had thick braces on the bottom since his feet were out of the snow.  Although his clothes were old and worn they were clean.

Kimura was just the opposite.  His pleated hakama was made of the finest silk as was the kimono underneath.  The thin haori served as his jacket.  The colors had been well applied and they seemed to glow in the setting sun.  But there were stains that would be impossible to remove.  Even the sword that he extended towards the old man was starting to fleck with rust.

“Just give me what money you have!” Kimura roared again, shaking his sword.

“Why don’t you sit down, son, and let’s talk,” the old man offered.  Moving slowly the old man began to sit.  Kimura did not.  He simply lowered his blade so that it still pointed at the old man who was soon squatting over the snow.

“The plum tree behind me has been here since before my grandfather was a boy.  It has seen fires, wars, and earthquakes.  It bakes in summer and freezes in winter.  But ever year it blooms.  Though the branches are now bare soon you will see the buds that will become blossoms.” 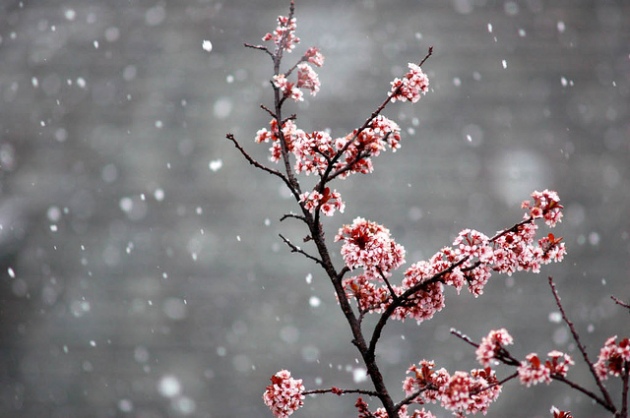 Kimura shifted his feet.  He couldn’t feel his toes in the snow.  His silken socks were  sodden through and his thin sandals felt as if they were made of eyes.  Through the wind he could smell the man.  There was the earthen smell of tea of his breath and the richness of salt used for braising fish coated the old man’s clothes.  Kimura’s stomach twisted at the smell.  When had he eaten more than frozen grass?

“Do what I say you stupid old man!”

“There are always seasons in life.  The winter is hard, but spring will come if you let it.  Put your sword away.  This is not a path you should walk.”

Kimura’s hand quivered.  He told himself it was the cold.  That because his need was great his actions were just.  He was not a thief.  He was doing what he had to.

He let loose a tremendous shout.  He raised the sword high and brought it down.  The snow turned red.

The old man’s eyes were sad.  He pulled his dagger from between the ribs.  Kimura coughed and dropped his sword.  He sank to his knees.

“Damn fool,” the old man said, standing.  “Winter is over.  You won’t be able to see the flowers bloom.”

The old man gripped Kimura’s hand tightly and gently lifted the dying man’s head.  “He will be cared for.”  Kimura’s eyes grew quiet and his body stilled.

The old man waited, hoping the snow would cover soon cover Kimura’s face.  It was getting dark and the wind was getting colder.  “Come out, boy.  You’re father has said goodbye.”

Down the path a shivering child emerged.  “Where’s my father?” he asked.

“He took the wrong path.”

The boy stood on one foot and then the other, chewing  on his lip.  Slowly, he nodded.  “I am Kimura Kouhei.” He said.

“Not any more,” the old man said told him.  “But we will find out if you can be someone else.”

Together they walked away as fresh snow coated the plum tree.