I finally got around to seeing the latest Captain America. The first one was firmly average. How about part two? Is the Grumpy Bird still grumpy? 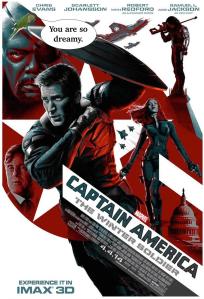 I’m struggling here. So much of what I have to say about various properties has been negative. I heard a lot of great things about CA:WS that I thought the only reaction was to be let down. No movie is perfect. But I have to say that this might be the best superhero movie that has come out. I went in cautiously optimistic and left the theater wanting to watch it all over again. Just to get them out of the way here are a few of the nit-picky things I think could have been handled better.

Now, here are some of the things I liked. Again, going to be spoiler free so expect vague-ness.

The action in this movie was really well handled. Very well choreographed. Flashy but still seemed practical. Every time Winter Soldier tossed that knife around it felt like there was a purpose. So many action movies just feel like fast cuts that make it impossible to follow the flow of the movies. This held onto scenes a little longer. They want the audience to appreciate the action choreography. Compare the opening fight between Batroc (and the nerd in me just shouted for joy at being able to bring up Batroc as a positive in a major motion picture) and Cap to another superhero fight between Batman and Bane. One of these fights was a boring collection of clumsy face punches and one was an inventive combat that pitted two highly skilled fighters against each other. Decide which is which for yourselves. (Hint: the bad fights were in Dark Knight Rises.) I never got bored with the action sequences.

But this movie just wasn’t action. The story and actors brought their A game. Cap visiting Peggy Carter in the hospital. If you did not have a swell of emotion during that scene, I don’t know what it takes to move you. That look of pain in Cap’s eyes when she recognizes him again. Man. Natasha talking about her past. It is just tiny little moments, but it does so much to humanize her and enhance the character. They have done more with the Black Widow in this film than in the other movies combined.

I love that it wasn’t just a superhero flick. It was a spy flick. it was about good old fashioned espionage. Some of the superhero movies we’ve all seen use that classification as a limitation, or an excuse for campy scenes or nonsensical villainous plots (Magneto turning everyone into mutants, the Lizard turning everyone into Lizards, Liam Neeson crashing a train, etc.) The plot here makes perfect sense with the stated goals of the villains. Hurrah.

But even while it was a spy flick, it kept hold of the fact that it is a superhero movie. Captain America the Winter Soldier is not ashamed that it is a superhero story. Batman, Superman, these movies have always slightly shied away from their comic book origins. CA:WS loves that it is a comic book. Metal arms. Flying Wing pack. Cap’s Shield. Zola. It takes all of those fantastical elements and holds them up to be seen as awesome.

There is one other thing I appreciated: this is not a cheesecake movie. Like most movies the main and supporting cast are incredibly attractive. Incredibly. Just wow. And, they come from a medium (comics) that has made a lot of money by showcasing the more titillating aspects of its characters. I came away from this movie really admiring the restraint shown in not having Chris Evans, Scarlett Johansson and Anthony Mackie uncovered as much as possible. The most it gives is a few scenes of the character in undershirts. Bravo.

Overall this movie was awesome. I do think it is going to be my favorite Superhero film. It was great action, great character moments and a lot of heart. Go see it.