Ready for a spooky review this close to Halloween? If so, I guess Doctor Strange counts. The good doctor reminds me of Wonder Woman in that they are both heroes that seem tricky to nail down just right. But here comes Jason Aaron’s take. Is he the guy to find the right balance? 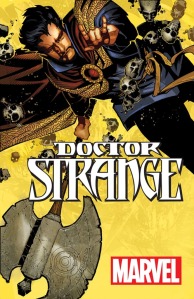 Quick Review: Welcome to the magical world of Stephen Strange! He fights magical monsters, woos magical maidens, and drinks with magical, umm, magicians. Basically, this is an easy to pick up and go Strange story. It is a great first issue with nothing being over-whelming and requiring no real prior knowledge of the characters. And, holy crap, is the art tremendous! Still, I have worries that Stephen is sounding a bit too much like Stark, that things will come down to an obvious “magic has a price” trope, and that the oncoming major antagonist will be a re-hashed version of the God-Killer from Aaron’s Thor run. Overall, I’m hesitantly optimistic but mostly wanting more Bachalo art.

Analysis: I know that Strange has always been bit of a ladies man, but there is something about the tone of his commentary that just feels like the RDJ version of Tony Stark. He just comes off as such the suave playboy that he seems to be too much of a copy rather than his own hero. That might be the biggest flaw in the book. Or maybe it is just a potential flaw as it doesn’t get in the way just yet, but I do have that gut feeling of why would I read about the adventures of Stark the Magician? I want to be sold on why Strange is uniquely awesome rather than shown how he is cool like that other mustachioed hero.

Kind of like what we saw in Amazing Spider-Man #1 this issue is also a little short on actual plot and heavy on developing the world this character will live in. This isn’t a bad thing, but it does make discussing the plot a little tricky. There are little hooks for future adventures, but who knows which ones will be continuing and which will be resolved next issue? The issue’s cliffhanger might not go any farther than the first couple of pages of issue #2 or it might be the introduction of a new supporting character who develops her own mystical powers as our Doctor deals with the incoming flights of magical beings fleeing the magic killer featured in the back up.

That is the other feeling I’m having. Is there going to be a plot here I haven’t seen in too many magical stories? As much as I loved the magical tiki bar, my main thoughts were 1) oh, yeah, Shaman is alive, but was his daughter invited? 2) This isn’t going to be a story about the cost of magic, is it? Don’t get me wrong. I love the concept of magic having a cost. So much so that I worked it into my fantasy novel Deadly Troubadours <shameless plus alert>. But I’d rather it be background rather than the basis of a story, especially if the protagonist is the Sorcerer Supreme. Lecturing that guy about the cost of magic seems a tad unnecessary. In fairness, worrying about upcoming threads is not the best way to judge a single issue and does have more to do with my getting tired of certain stories. So, this is more my hangup than the issue’s. But they became my hangups from reading so many comics they trot them out.

Hands down my favorite part of this comic was the art. Bachalo is just compelling. I love his take on Strange and on the world he inhabits. I love that he displays effortless diversity in the characters he uses to populate this world. But, grumpy bird that I am, I couldn’t just appreciate the art. I had to wonder if this book will feel empty with a fill in artist or if Bachalo moves on to another project. My answer is yes.

Wrap Up: A serviceable first chapter with beautiful visuals. Big on work building, a little shallow on actual plot. Whets the appetite for issue #2 even if it doesn’t reassure me that #2 will provide a plot worth waiting for.