Growing up Captain America was one of those characters that I almost always liked more in concept than in execution. (I felt the same way about Wonder Woman and to some extent Superman.) I had some random issues but never a full arc. In college a friend lent me a good chunk of the Gruenwald issues. I still stand by them as some of the best Cap comics out there. Recently, I’ve been reading through Captain America since his silver age introduction. Currently I’m in the mid 230s of volume 1. It is some fun reading for the most part. But as a fan who has been less than impressed with the direction of the book since Rememder took over (and after his leaving the title) I have been in a hurry to reread what might be the greatest Captain America stories. 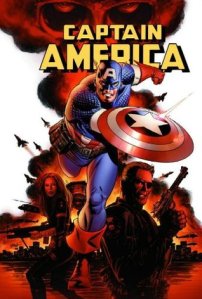 Quick Review: Under Brubaker’s pen, Captain America is such a great character. He is a soldier and a hero. He is a man of values and morals. But he is complex and there is no preaching or speechifying to turn him into a bland boy scout. Those values mean hard choices a realistic amount of doubt without turning whiny. This is a world of noir and spies where secrets are everywhere and their revelations come at a price. Epting and Lark enhance this feeling with moody inks and art that seems to be sparse while still transmitting an incredible amount of detail and acting. The story just keeps growing and this volume serves as prologue to what comes next.

Analysis: This is a hard review for me to write. It is much easier to pick something apart when it fails. With this, I don’t know where to start because I just want to gush with praise. One of the strong suits is that this comes off as immersed in the history of Captain America. I makes it feel real. Like Steve Rogers is a part of history even after having adapted to the present. I’m reminded of how James Robinson’s Starman always felt like it inhabited a fully realized world. This is much the same, but existing in the shadowy world where super-heroics meets espionage.

And I have to admire that beginning. Spending an issue establishing the threat of the Red Skull, just to take it away. Sure, thinking about it, there is an element of “knocking down  Worf” to make a new threat appear even more threatening. But Brubaker makes it work. Perhaps this is because the emphasis is less on establishing the villain of the piece but rather in furthering the mystery of what the villain’s plan is. Maybe you could argue that having less of an interest in who the villain is represents a failing, but I’m still reaching for the next issue as soon is the current one ends.

Also, Sharon Carter. Coming from reading the 60s and 70s comics where women are seldom treated as capable and all too often are extremely damsel-ed (although Captain America doesn’t compare to that era’s painful to read treatment of Sif in the pages of Mighty Thor) it shines how she is treated as an effective and independent agent. And Nick Fury. Man, how I miss Nick Fury as the cranky and crusty keeper of secrets.

Wrap Up: What else is there to say? This fills my need for good comics and Steve Rogers until he is taken back off the shelf. Also, perfect for anyone looking for that spy/super-hero cross-section that made Winter Soldier a great movie.