The first city I can remember living in is Monticello, Florida. It is a tiny little north Florida town with a population under 3,000. Even if you include the surrounding county in your count, you’ll come up with less than 15,000. Like I said, it a small town. Since then I’ve moved through other cities that are considerably larger than Monticello, but somehow it still comes as a shock to me that I am now living in Tokyo.

As I probably don’t need to tell you Tokyo has a population that is considerably larger than 3,000. It is an amazing city with so many different aspects. Crazy, hyper electric dance. Traditional, elegant temples. Bustling crowds heading to work. If you are searching for glamour, convince or vice, I’m sure it can be found in Tokyo.

But there are a few drawbacks to living in Tokyo. Of course, there is the cost of living. Tokyo is not exactly a cheap city to live in, although it can be done. Space can also come at a premium, even if that space is just trying to walk down certain streets without feeling pressed in. But those bodies bring more than just pressure with them, they also bring smells.

Tokyo is an amazing city, but at times it just smells bad. There is the smell of yesterday’s alcohol that can come in waves off of the people just heading home during the morning rush, but that same smell can also be found on several salarymen who are wearing the same boozy over coat.

And I don’t care what the travel books and city guides say about how Japanese people never colognes or perfumes. Believe me, there are those same people you can find anywhere who when they wear perfume, they wear it thick enough that you can taste it as you walk by them. Or enter an elevator they have used in the past ten minutes.

But, really, the smell that gets me the most is one of the more common unpleasant smells found in Tokyo. Cigarettes. At times it seems everywhere. I leave my house in the morning, and the nearby office building’s smoking area, just on the edge of the street, is packed with smokers. You can smell it anywhere on the block.

I walk to my train station on a street that has no smoking signs printed in the ground at the the beginning and end of every block, and I pass by smokers puffing away and throwing their sticky trash either anywhere they please, or shoving them down sewer grates. I always wonder how much many Tokyo spends filtering out cigarette butts from its water supply.

I get on the train. Its a smaller station and one of the few places where I am least likely to find smoke. But, when I get off at my stop I know that if I head to the bathroom the is a decent chance someone will be smoking in a toilet stall. And if I go down the street, again on streets labelled with no smoking signs, there will be more people lighting up and paying no mind.

Many. and I can probably safely say most, restaurants allow smoking so you never know when I nice meal will suddenly be accompanied by the smell of ash. And even the ones that have smoking and non smoking sections are still smoking because if two tables are next to each other and one is smoking and one isn’t the smoke is not sentient enough to know it should avoid the non smoking area.

Major areas, Shinjuku, Shibuya, Ikebukuro, have taken to erecting huge smoking areas in many of the crowded public places, to which people then flock too. But usually these areas are the places you cannot avoid passing through. Next to major landmarks, for example the famous Hachiko statue is close enough to a smoking pit so that it constantly reeks of smoke. The central bus hub for Shinjuku station is flanked on either sides by smoking pits. Ikebukuro station is the same. In all of these areas there are other huge smoking areas making sure that you are never too far from concentrated filth.

Many of these are also built close to entrances. Somehow the downstair areas of Shinjuku and Shibuya stations have constant drafts that can pull the smokey smell into the station making certain areas full of noxious smells.

Really, Tokyo has so much going for it. But for a city and country that loves to praise its own cleanliness, it can be oppressively bad smelling. For a city that is also trying to build its reputation as tourist friendly and modern, the amount of tobacco in the air and on the ground is a constant source of frustration.

So, please, come to Tokyo. It is amazing. Just be prepared for the smoke. 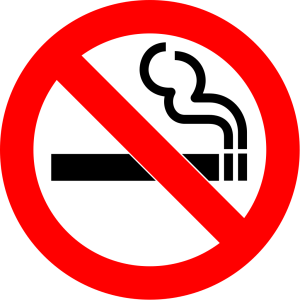