In the middle of the morning my 10-month old boy decided to take a little nap. This hardly ever happens, so any time he spends sleeping is treasure. Well, he managed to fall asleep on my lap, so I was pretty much trapped until he woke up, because once he wakes up he won’t be going to to sleep for a long while. Fortunately I had some wireless headphones and my iPad within reach. I took a chance watching the first episode of Daredevil. I figured Leo would never sleep through the entirety. He did. And I got to watch the whole episode. Huzzah! 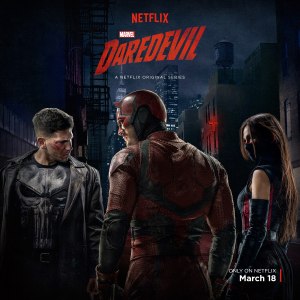 This show knows how to balance. Strong Daredevil action scenes. Good chemistry from our main trio of Matt, Foggy, and Karen. Their new status quo of over worked and underpaid (for a good cause) attorneys is brought home nicely. Each member gets their own segments. Foggy gets a good scene of not-quite-bravery. Karen has her moment, although on reflection it comes very close to being a damsel even if she is leading an escape. And Matt as our favorite Devil. And Frank… what a great walk.

I almost just want to jump into Frank, but let me put that aside for at least the opening paragraph. Again, this show does a great job of striking balance. Balance between who we spend time with, who we get to know. Are we with heroes or villains. Balance between action or office comedy. This show finds that sweet spot and makes it all exist in the same world. And it feels effortless and authentic.

I’ll freely admit that I enjoy the show about the guy who can run fast. It is far superior to all the other offerings by the Distinguished Competition. But as much as I like it, a large part of it does feel staged. It doesn’t feel real, or at least there is a stylization to everything. Daredevil feels real. And it has a guy in body armor leaping across rooftops. Hot Diggity.

And, this season, it has Frank Castle. Holy Crap. Remember that time he shot up a hospital? Damn. That was terrifying and awesome. I am so intrigued by this version of Frank and he probably has had less than 10 minutes of screen time.

Let’s ask some questions: How did he even find the guy? He was in a hospital with an assumed name. And Frank got there. How? Not looking for holes. Just curious. Also, is Frank going to be the cold driven soldier we’ve so often seen. Because in this episode there seems to be a bit of Dark Knight’s Joker mixed in. A guy stirring terror into his mission. Because, as I mentioned, he was openly firing in a crowded hospital. What will this Frank’s  take on collateral damage be? So curious.

So far, off to a great start.

I dug this episode. But 13 episodes are a long way to go. Will all of them hold up? That is the question. And what will Elektra add to the story? And will we get better ninja action than last season. (I was not very impressed with season 1’s ninja fight.) And most importantly, will i be able to mainline this episodes while caring for an infant?

Daredevil S02e02: Dogs to a Gunfight

Daredevil S02e12: The Dark at the End of the Tunnel