(Every now and then I like to take a real even of my life and try and treat it like a little fantasy episode. This is basically what I did for awhile with my son this afternoon. The first part of this story can be found here. It is also based on a real life event, but from a completely different day since that was months ago.)

The father looked in the rough direction his son pointed. On one side was a gentle path, with even measured steps. The other was through an overgrown chunk of forrest, where the footing would be irksome for an adult and a cause for concern for a child. He smirked and shook his head, knowing which path his son meant.

Soon they were in the shade of the trees, scrambling through underbrush, with their feet constantly slipping on the loose leaves covering the ground. The father watched as his sons little legs carried him over large rocks and then under thick bushes. Again he smiled. Even a few weeks ago this would have been too much for the boy. No doubt he would have still chosen this path, but the father would have been half carrying the tyke. Now all he had to do was hold his son’s hand and scoop him up when he slipped too far. Or just watch and try not to either laugh or be over-protective. A few bumps and scraps were part of being a child.

Speaking of which. “Watch for those bushes up ahead. They’re a little prickly.”

“I don’t mind. I’m tough,” the son informed his father, who watched as his son proceeded to slip and go practically face first into the holly bush. He saw the boy’s grimace, but there was no complaint. After a few paces the father called out.

“Hey, look at this pretty flower.” It was just an ordinary dandelion, but the son still stopped and gazed appreciatively. Meanwhile, the father did a quick check over his son. No scrapes from the holly bush. The boy’s skin wasn’t even red. Guess the boy was tough after all.

For the next hour, father and son continued their little trek, with the path climbing up only to drop down once again. Soon they were both covered in a layer a dust and dirt. The father was glad they ended up wearing yesterday’s clothes when they left the house rather than putting on something clean.

Looking down, the father could see the first hints of tiredness in his son. They should start heading back soon. The good news was that if they took the lower, easier path, the return journey would be much shorter. Convincing his son that might e the best method would be the hard part.

Then he saw the perfect excuse.

“Well, would you look at that.”

“I see something pretty neat. It’s like a little treasure. But it might look a little scary at first.”

The father smiled. He knew his son wasn’t scared of most things. But he also knew that among the various helpers who looked after the village children when the parents had tasks that needed attending to there were those who were afraid of things like bugs and insects. And they were little too free in promoting a fear of nature to their wards.

Which was exactly why, after seeing the little locust husk, the father wanted to warn his son. The husk was as large as the boys finger after all, and it certainly could look rather intimidating with its claws and stinger. Being a husk, there was no danger, but he wasn’t sure if the boy would understand.

“Okay,” the father said, “I’m going to get it. It’s a neat little treasure. And I bet your mom will really like to see it, too.” The value of bringing up his wife was two-fold. First, it would give the boy a little extra incentive to be brave. Second, his wife really would appreciate the husk as she had an innate fondness for all things natural. Except for snakes, which weirded her out.

The father plucked the little husk off the tree and held it at eye level, careful to not bring it too close to his son. “See this?” The father asked, using the phrase his son was so fond of using as he started pointing out the features of the husk, making sure to highlight that it was not a living, moving thing.

At the end of the lesson, the father asked the big question. “Want to touch it?”

With out saying a word the boy cautiously reached out with a single finger and slowly reached out to the husk. After a quick touch, he recoiled his finger, not trusting the the thing wouldn’t soundly spring into action. Seeing the no such thing happened he reached out again and again.

“I think your mom would really like this little treasure. What do you think.”

“Should we bring it to her?”

“Okay. Should Daddy carry it? Or do you want to carry it?”

“Okay.” The father held out the little husk and ever so gently his son picked it up.

“You know,” the father said slowly, not wanting to startle the boy who’s eyes were fixed on the alien thing in his hands. “That little husk is so delicate, it might get crushed if we take the upper path. Why don’t we take the lower path so we can keep it safe?”

“That’s a good idea,” the son said, nodding his approval.

And together they started walking back home. 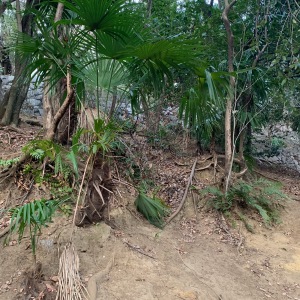