In two days I will be running more first hired gig as a Dungeon Master. I’m a little apprehensive about it. First off, I’m taking what, until now, has been a hobby for the enjoyment of friends, and doing it for cash. Not a great deal mind you, but enough. What can I say, it’ll be people I’ve never met before who needed someone to run a game, and I needed it to be worn related in order to leave my family for the day. Life is funny like that.

Either way, this being both for strangers and for cash makes me a little extra nervous about screwing up. So, this post is just as for me in terms of writing down 5 points that I think make for good DMing.

Here they are in no particular order:

Probably the most basic rule. If you don’t know what you want your story to be, how are you going to present it to the players? A good DM should be able hold the rough beats of the game session in their head. Fights, characters, dangers, terrain, all of this is part of the story. Know it.

This is the flip side. A good DM does need to have a story ready, but should also know that they are telling the story, but it is the player characters that are living it. And most players do not appreciate being strongly led by the nose. The whole world is open to them. Let them explore. If they want to go somewhere, let them. It is possible later to steer them back to the plot, or just have the plot meet them.

3: Locations can be Anywhere

So, you made the story, the PCs went the other way and it doesn’t seem like they are coming t back. Then move the story. They were supposed to explore the caves on the outskirts of town, but instead they became the secret is in the sewers? Then guess what, making the secret in the sewer is the way to go. There is very little in that cave that can’t be transferred to a sewer system. And by saying yes to the player, they will feel more involved and have more fun.

I think every DM needs a screen. They can be super useful and provide info. But, best of all, they hide your dice. This lets us lie. This can be a boon to the players in many ways. The dice are a tool, but they are not more valuable than personal judgement. Fudge rolls to make the game more fun. This can mean both missing and hitting the PCs. Fights that are too hard feel like a pain. Fights that are too easy are dull. Fights that are to long are a slog. If fishing those numbers makes for a better game, then do so. After all, it’s only a number.

People sound different. It’s true. Don’t believe me? Go out and talk to folk. So, if people sound different, the so shouldn’t people in the game? I am neither a master of voices or accents. But, I can mix and match what little talent I have and throw in a few quirks and ticks to try and make prime NPCs feel a little different. This doesn’t half to be great theatre, but variety does indeed spice things up. Players want to feel immersed, and if they meet a grizzled soldier, an abyssal alchemist, and a foppish Nobel who all sound the same, the game suffers.

That’s my list of five things I think every DM should keep in mind. What are some tips you think a DM should focus on? Let me know in the comments. 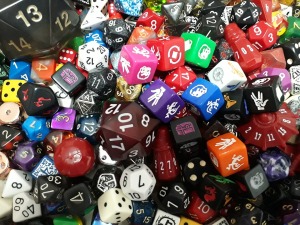